Motor vehicle collisions account for the majority of blunt vascular trauma. Much of the literature describes the management of these injuries in isolation, and there is little information concerning the incidence and outcome in patients suffering multiple trauma. This study was undertaken to describe the spectrum of blunt vascular injuries in polytrauma patients.

All patients who had sustained blunt vascular trauma over a 6-year period (April 2007–March 2013) were identified from a prospectively gathered database at the Level I Trauma Unit, Inkosi Albert Luthuli Central Hospital, Durban, South Africa. The retrieved data consisted of age, sex, mechanism of injury, referral source, Injury Severity Score (ISS), New Injury Severity Score (NISS), time from injury to admission, surgical intervention and outcome. The initial investigation of choice for patients sustaining multiple injuries was computed tomography (CT) angiography if they were physiologically stable, followed by directed angiography if there was doubt concerning any vascular lesion. If technically feasible, endovascular stenting was the preferred option for both aortic and peripheral vascular injuries.

Of 1,033 patients who suffered blunt polytrauma, 61 (5.9 %) sustained a total of 67 blunt vascular injuries. Motor vehicle collisions accounted for 92 % of the injuries. The median ISS was 34 [interquartile range (IQR) 24–43]. The distribution of blunt vascular injuries was extremity (21), thorax (20), abdomen and pelvis (19), and head and neck (7). Endovascular repair was employed in 12 patients (ten blunt aortic injury, one carotid-cavernous sinus fistula, one external iliac artery). Of the extremity injuries, primary amputation was undertaken in 8 (38.1 %) and secondary amputation in 2 (9.5 %). The total amputation rate was 48 %. There were 17 (28.3 %) deaths, of which 11 (64.7 %) were directly attributable to the vascular injury and 6 (35.3 %) of these occurred on the operating table from exsanguination, the majority from injuries to the abdominal vena cava.

Blunt vascular injury is uncommon in the patient with multiple trauma but confers substantial morbidity and mortality. In those cases with peripheral injuries, delays in referral to definitive care frequently exceed the ischaemic time, resulting in a high rate of amputations. Central injuries, especially those of the vena cava, account for the majority of directly attributable deaths. 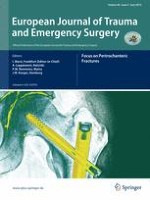 Erratum to: Efficacy of N-acetylcysteine on neuroclinical, biochemical, and histopathological parameters in experimental spinal cord trauma: comparison with methylprednisolone