Vascular involvement, especially in young males, is seen in up to 40% of the patients with Behcet’s disease (BD) and is a major cause of mortality and morbidity. In this study, we investigated vessel wall thickness (VWT) and dilatation in lower extremity veins with Doppler ultrasound (US) in male BD patients. Sixty-one male patients with BD, 37 healthy male controls (HC) and 27 male patients, with ankylosing spondylitis (AS), were included in the study. Venous Doppler US was performed by an experienced radiologist blinded to cases. Bilateral common femoral vein (CFV) wall thickness and great/small saphenous vein (SV) dilatations were assessed. All venous measurements were significantly higher in BD compared to AS and HC (p < 0.001 for all). Both right and left extremity CFV thicknesses had a high area under the ROC curve (> 0.8). Cut-off values for right and left CFV thicknesses for BD was 0.49 and 0.48 mm, respectively. High sensitivity and specificities are observed for both measurements (right CFV: sensitivity 81%, specificity 78.4%; left CFV: sensitivity 82.8%, specificity 81.1%). We found increased CFV thickness in BD patients independent of vascular involvement. As a similar change was not observed in controls, increased CFV thickness may be a specific sign of venous inflammation in BD. Our acceptable sensitivity and specificity values of CFV measurements suggest that assessment of femoral vein thickness with US may be a candidate diagnostic tool, especially in young males suspected of BD. 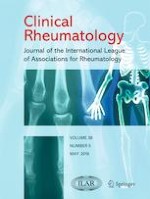