Verbal memory is an essential cognitive ability with scope for adequate treatment of information and for orientation in everyday life. Our study is centered on memory performance in the wake of treatment for ruptured intracranial aneurysm.

Three psychological tests were performed: (1) within a month of the neurosurgical intervention, (2) 1 year and (3) 5-7 years after the ruptured aneurysm treatment. Under comparison are the overall results of tests for verbal memory capacity in a cohort of patients (N = 59) and in the control group.

Three post-treatment measurements revealed a persistent deficit of verbal memory. The cohort’s average performance improved from -1.3 SD (standard deviation) below the average of the norm to -0.5 SD below the norm at the second test 1 year after treatment, while at the third test the deficit had worsened to -0.68 SD. Similarly, testing for long-term recovery at 5-7 years postoperatively showed the patients’ performances to be 2/3 SD below the average of the general population.

The results of the study imply the need for long-term rehabilitation of memory in this particular group of patients. 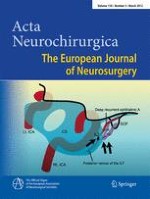