The incidence and the severity of early voice and swallowing postthyroidectomy symptoms are significantly reduced in patients who undergo VAT compared with conventional surgery. 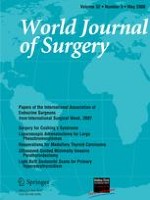 Is Laparoscopic Resection Adequate in Patients with Neuroendocrine Pancreatic Tumors?