Low public awareness of cytomegalovirus (CMV) results from the only mild and transient symptoms that it causes in the healthy immunocompetent host, so that primary infection usually goes unnoticed. The virus is not cleared, however, but stays for the lifetime of the host in a non-infectious, replicatively dormant state known as ‘viral latency’. Medical interest in CMV results from the fact that latent virus can reactivate to cytopathogenic, tissue-destructive infection causing life-threatening end-organ disease in immunocompromised recipients of solid organ transplantation (SOT) or hematopoietic cell transplantation (HCT). It is becoming increasingly clear that CMV latency is not a static state in which the viral genome is silenced at all its genetic loci making the latent virus immunologically invisible, but rather is a dynamic state characterized by stochastic episodes of transient viral gene desilencing. This gene expression can lead to the presentation of antigenic peptides encoded by ‘antigenicity-determining transcripts expressed in latency (ADTELs)’ sensed by tissue-patrolling effector-memory CD8 T cells for immune surveillance of latency [In Reddehase et al., Murine model of cytomegalovirus latency and reactivation, Current Topics in Microbiology and Immunology, vol 325. Springer, Berlin, pp 315–331, 2008]. A hallmark of the CD8 T cell response to CMV is the observation that with increasing time during latency, CD8 T cells specific for certain viral epitopes increase in numbers, a phenomenon that has gained much attention in recent years and is known under the catchphrase ‘memory inflation.’ Here, we provide a unifying hypothesis linking stochastic viral gene desilencing during latency to ‘memory inflation.’ 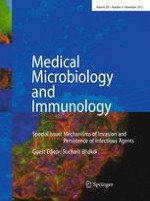 Principles of polyoma- and papillomavirus uncoating