Deep-brain stimulation (DBS) of the zona incerta (ZI) has shown promising results for medication-refractory neurological disorders including Parkinson’s disease (PD) and essential tremor (ET). The success of the intervention is indispensably dependent on the reliable visualisation of the ZI.
The aim of the study was to evaluate different promising new magnetic resonance imaging (MRI) methods at 3.0 Tesla for pre-stereotactic visualisation of the ZI using a standard installation the protocol.

MRI of nine healthy volunteers was acquired (T1-MPRAGE, T2-FLAIR, T2*-FLASH2D, T2-SPACE and susceptibility-weighted imaging (SWI). Image quality and visualisation of the ZI for each sequence were analysed independently by two neuroradiologists using a 6-point scale. For T2*-FLASH2D the axial, coronal and sagittal planes were compared. The delineation of the ZI versus the internal capsule, the subthalamic nucleus and the pallidofugal fibres was evaluated in all sequences and compared to T2-FLAIR using a paired t-test. Inter-rater reliability, contrast-to-noise ratios (CNR), and signal-to-noise ratios (SNR) for the ZI were computed. For illustration, coronal T2*-FLASH2D images were co-registered with the corresponding section schema of the Schaltenbrand–Wahren stereotactic atlas.

Only the rostral part of the ZI (rZI) could be identified. The rZI was best and reliably visualised in T2*-FLASH2D (particularly coronal orientation; p < 0.05). No major artifacts in the rZI were observed in any of the sequences. SWI, T2-SPACE, and T2*-FLASH imaging offered significant higher CNR values for the rZI compared to T2-FLAIR imaging using standard parameters. The co-registration of the coronal T2*-FLASH2D images projected the ZI clearly into the boundaries of the anatomical sections.

The delineation of the rZI is best possible in T2*-FLASH2D (particularly coronal view) using a standard installation protocol at 3.0 T. The caudal ZI could not be discerned in any of the sequences. 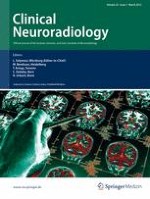 Comparison of Digital Subtraction Angiography, Micro-Computed Tomography Angiography and Magnetic Resonance Angiography in the Assessment of the Cerebrovascular System in Live Mice

TrueFISP of the Pediatric Pineal Gland