Surgery and radiotherapy offer the same results in the treatment of early glottic carcinoma, with a cure rate of approximately 90% [ 1].
The introduction of endoscopic CO 2 laser surgery in early glottic carcinoma (epidermoid carcinoma confined to the true vocal cords with normal mobility) has added controversy to the standard treatment choice. Laser surgery is quicker, which reduces cost considerably. However many institutions prefer to use radiotherapy in the belief that the voice will be better preserved after treatment [ 2]. Although the principal objective of oncology treatment is the complete eradication of the illness, normal voice preservation is another important consideration in the treatment choice of early glottic carcinoma. For this reason, post-treatment voice quality is a relevant factor to take into account when evaluating the results.
Anzeige
Quantitative acoustic measurements are more regularly studied. These are obtained from tools that digitize and analyze the voice being investigated and quantify the characteristics that deviate from normality, understanding normality to mean when the voice is uniform in both amplitude and tone periodicity. The addition of noise to the voice signal is also a defect that affects voice quality, and this is the third acoustic characteristic that is studied using spectrography.
Another of the factors to take into account is the auditive perception that is generated in the listener and is evaluated by ways of perceived voice quality, making use of semi-objective scales such as the GRBAS scale, as described by Hirano [ 3]. It is recommended that these measurements are made by two experts, although the parameters have shown sufficient reliability (inter- and intra-observer reproducibility) when used in a clinical setting [ 4].
Although all these measurements are important parameters in defining voice quality, they fail to provide information on the patient’s perceived voice quality. For this there is a method available that permits the patient to describe the sensations their voice gives: the Voice Handicap Index [ 5]. It is a questionnaire that reviews situations grouped into three areas (functional, physiological and emotional) and gives an idea of the subjective impact that a vocal problem produces in a specific individual.
In this study, we present the objective and subjective analysis of voice quality following treatment of an early epidermoid glottic carcinoma. Results from the objective evaluation of the voice, along with the self-evaluation of voice quality quantified using the Voice Handicap Index of a group of patients treated with endoscopic laser surgery are compared with patients treated with radiotherapy.
Anzeige

Voice analysis and quality of life studies of 19 patients treated with laser surgery and 18 with radiotherapy, suffering from early glottic carcinoma, were evaluated. Lesions were classified according to the American Joint Committee on Cancer [ 6].
In patients who received radiotherapy as the primary treatment, this was performed using a 6 mv linear accelerator to bilateral ports and one in front, with field sizes ranging from 5 × 5 to 6 × 6 cm. Wedges were used to establish dose homogeneity .
In the case of patients treated with surgery, the treatment consisted of direct laryngoscopy for the complete resection (partial transmuscular cordectomy) of the lesion with CO 2 laser. Objective voice analysis and voice quality studies, performed by both patients and examiners by means of an examination protocol including: perceptual analysis of dysphonia, acoustic analysis, aerodynamic efficiency and patient perception, were applied to both groups. In all patients, this protocol was undertaken at least 6 months after completing treatment.

The acoustic analysis was performed using Doctor Speech V3 software for Windows 95. The acoustic signal was recorded using the Voice Assessment application. The computer used was a Pentium II at 100 MHz and with 16 Mb of RAM and a Sound Blaster 16 sound card. The sampling frequency was 44,100 Hz and a high frequency range microphone was used. The microphone was located 10 cm from the patient’s mouth while they emitted the “e” sound at comfortable intensity and pitch levels in a soundproof chamber. The computer captured 3 s of sound. Once the signal was digitized, the computer calculated the following acoustic parameters: fundamental frequency ( F 0), jitter or frequency variation (%), shimmer or amplitude variation (%) and NNE or normalized noise energy, which measures the degree of noise produced by turbulent air escaping through the glottis during vocal emission.
Using the same digitized voice sample, a narrow band spectrogram was generated (45 Hz) using the Speech Analysis application. The spectrograms obtained were grouped into four types according to the Yanagihara criteria [ 7].

This consisted in measuring the maximum phonation time (TMF) for the “a” vocal after instructing the patient to sustain this vocal for the longest time possible at a comfortable pitch and intensity. The patients were asked to repeat the test at least three times and the highest value was retained.

The patients completed the “Voice Handicap Index” via a self-evaluation form comprising 30 questions covering three domains [ 5]: functional, physical and emotional, translated from the original work in English by one of the authors. Each question was assigned a score of 0–4 (from least disability to most). In each item, the maximum score was 40 points and we classified them as mild disability (less than 20), moderate (21–30) and severe (more that 30). Adding the three scores together, the maximum possible was 120, and we classified the vocal disability as mild (less than 30), moderate (31–60), severe (61–90) and very severe (91–120).
Anzeige

The data obtained was gathered in the statistical database SPSS 12.0. The statistical analysis used was the Student’s t test in order to compare averages and the Chi-squared test for comparing proportions. The statistical differences were considered significant when P was lower than 0.05. 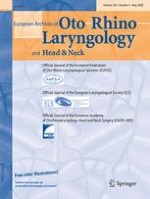 Primary carcinoma of the frontal sinus: a case report and a review of literature

Tuberculosis of the epiglottis: a case report