First-year students of traditional college age often drink irresponsibly, especially if they believe that alcohol use is integral to the college experience. Individuals who subscribe to this view embrace their transitional status, recognize that they have relatively few role obligations, and thus regard the college years as the timeframe for drinking. Volunteerism, which places additional constraints on students’ behaviors by facilitating their integration into mature adult society and increasing social responsibility, may be an avenue for reducing levels of alcohol consumption among this subgroup. Numerous studies have found an inverse relationship between involvement in service and levels of alcohol consumption among college undergraduates. Data from a prospective survey administered to a cohort of first-year students of traditional college age at the beginning, and again at the end of the fall semester, was used to assess the relationship between volunteerism, alcohol beliefs, and drinking behavior (n = 423). Zero inflated negative binomial regressions indicated that alcohol beliefs moderated the effects of participation in volunteer/service activities on the frequency of alcohol use and heavy drinking. In particular, there was a strong negative relationship between volunteerism and heavy drinking among first-year students who believed that the use of alcohol was integral to the college experience. This suggests that engaging first-year students with permissive alcohol beliefs in service activities is a way to curb their drinking early, by the end of the first college semester, before it becomes a more long-term pattern. 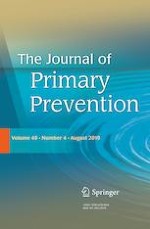 Correction to: Meta-Review on the Effectiveness of Classroom-Based Psychological Interventions Aimed at Improving Student Mental Health and Well-Being, and Preventing Mental Illness

Lowering Risk for Significant Behavior Problems Through Cognitive-Behavioral Intervention: Effects of the Tools for Getting Along Curriculum 2 Years Following Implementation

The Prevention of Drugged Driving: Needs, Barriers, and Self-Efficacy of Prevention Professionals

National Trends in Parental Communication With Their Teenage Children About the Dangers of Substance Use, 2002–2016