Walnuts have high levels of the omega-3 fatty acid alpha-linolenic acid (C18:3n-3, ALA) and the omega-6 fatty acid linoleic acid (C18:2n-6, LA). Previous research has demonstrated that pre-treatment of BV-2 microglia with walnut extract inhibited lipopolysaccharide (LPS)-induced activation of microglia. As an extension of that study, the effects of walnut-associated fatty acids on BV-2 microglia were assessed. BV-2 murine microglia cells were treated with LA, ALA, or a combination of LA+ALA prior to or after exposure to LPS. Nitric oxide (NO) and tumor necrosis factor-alpha (TNF-alpha) were measured in cell-conditioned media. Cyclooxeganse-2 (COX-2) and inducible nitric oxide synthase (iNOS) expression were assessed in BV-2 microglia. Both LA and ALA protected against LPS-induced increases in NO, iNOS, COX-2, and TNF-alpha when used before LPS exposure. When BV-2 microglia were treated with fatty acids after LPS, only COX-2 and TNF-alpha were significantly attenuated by the fatty acids. There was no synergism of LA+ALA, as the LA+ALA combination was no more effective than LA or ALA alone. Fatty acids, like those found in walnuts, may protect against production of cytotoxic intermediates and cell-signaling molecules from microglia and may prove beneficial for preventing age- or disease-related neurodegeneration. 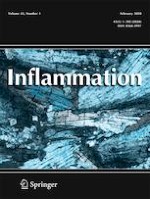 CYTL1 Promotes the Activation of Neutrophils in a Sepsis Model