Until recently, there was no standard second-line treatment for advanced urothelial carcinoma. Although included in first-line regimens, role of anthracyclines was never investigated as second-line therapy. Single-agent paclitaxel showed modest results in this setting. The purpose of this study was to assess the efficacy and toxicity of concomitant weekly administration of epirubicin plus paclitaxel in patients with metastatic urothelial carcinoma previously treated with platinum-based regimens. Between March 2004 and May 2008, thirty-five consecutive pretreated patients with metastatic transitional cell carcinoma of the urothelial tract were enrolled. Median age was 64 years (range 45–72 years), and median ECOG PS was 1 (range 0–1). Patients received epirubicin 25 mg/m2 and paclitaxel 80 mg/m2 on days 1, 8, and 15 every 28 days. All patients were evaluable for efficacy and toxicity; a median of four cycles was administered. One patient (3%) showed a complete response (CR), nine patients (26%) had partial response, stable disease was observed in eight patients (23%) for a disease control rate (DCR) of 52%. The median time to progression (TTP) was 7.6 months (95% CI 3.2–10.7 months) with a median survival time (MST) of 12.6 months (95% CI 4.6–18.8 months). Toxicity was acceptable and manageable: no cases of febrile neutropenia occurred and only two patients (6%) developed grade 3 neuropathy. This is the first study that evaluated the role of anthracyclines in combination with paclitaxel as second-line chemotherapy in metastatic transitional cell carcinoma of the urothelium. Our findings show the substantial activity of weekly regimen of paclitaxel and epirubicin: due to its manageable profile of toxicity, this schedule could represent an interesting therapeutic option in previously treated patients with advanced urothelial carcinoma. 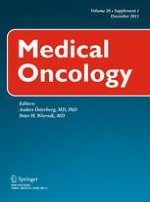