It is well known that arthrodesis is associated with adjacent segment degeneration (ASD). However, previous studies were performed with simple radiography or CT. MRI is most sensitive in assessing the degenerative change of a disc, and this is the first study about ASD by radiography, CT and MRI. We sought to factors related to ASD at cervical spine by an MRI and CT, after anterior cervical spine surgery.

This is a retrospective cross-sectional study of cervical disc herniation. Patients of cervical disc herniation with only radiculopathy were treated with either arthroplasty (22 patients) or ACDF with cage alone (21 patients). These patients were required to undergo MRI, CT and radiography preoperatively, as well as radiography follow-up for 3 months and 1 year, and we conducted a cross-sectional study by MRI, CT and radiography including clinical evaluations 5 years after. Clinical outcomes were assessed using VAS and NDI. The fusion rate and ASD rate, and radiologic parameters (cervical lordosis, operated segmental height, C2-7 ROM, operated segmental ROM, upper segmental ROM and lower segmental ROM) were measured.

The study groups were demographically similar, and substantial improvements in VAS (for arm) and NDI (for neck) scores were noted, and there were no significant differences between groups. Fusion rates were 95.2 % in the fusion group and 4.5 % in the arthroplasty group. ASD rates of the fusion and arthroplasty groups were 42.9 and 50 %, respectively. Among the radiologic parameters, operated segmental height and operated segmental ROM significantly decreased, while the upper segmental ROM significantly increased in the fusion group. In a comparative study between patients with ASD and without ASD, the clinical results were found to be similar, although preexisting ASD and other segment degeneration were significantly higher in the ASD group. C2-7 ROM was significantly decreased in ASD group, and other radiologic parameters have no significant differences between groups.

The ASD rate of 46.5 % after ACDF or arthroplasty, and arthroplasty did not significantly lower the rate of ASD. ASD occurred in patients who had preexisting ASD and in patients who also had other segment degeneration. ASD may be associated with a natural history of cervical spondylosis rather than arthrodesis. 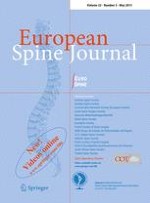 Complaints of micturition, defecation and sexual function in cauda equina syndrome due to lumbar disk herniation: a systematic review