What are the trends in incisional hernia repair? Real-world data over 10 years from the Herniamed registry | springermedizin.de Skip to main content
SUCHE MENÜ 1 2 3 4

There is an increasingly controversial debate about the best possible incisional hernia repair technique. Despite the good outcomes of laparoscopic IPOM, concerns about the intraperitoneal mesh placement and its potential intraabdominal complications have risen. Against that background, this paper now analyzes changes and trends in incisional hernia repair techniques in the recent decade.

Between 2010 and 2019 a total of 61,627 patients with primary elective incisional hernia repair were enrolled in the Herniamed Registry. The outcome results were assigned to the year of repair and summarized as curves to visualize trends. The explorative Fisher’s exact test was used for statistical calculation of significant differences. Since the number of cases entered into the Herniamed Registry for the years 2010–2012 was still relatively small, the years 2013 and 2019 were compared for statistical analysis.

Analysis of data from the Herniamed Registry shows a significant trend to the disadvantage of the laparoscopic IPOM and to the advantage of the open sublay operation and the new minimally-invasive techniques (E/MILOS, eTEP, preperitoneal mesh technique). Despite all the recommendations in the guidelines, 10% of incisional hernias continue to be treated by means of a suture technique.
Anzeige 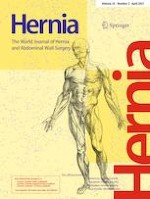 Should enhanced recovery after surgery (ERAS) pathways be preferred over standard practice for patients undergoing abdominal wall reconstruction? A systematic review and meta-analysis

Comment to: Cutting through the fat: a retrospective analysis of clinical outcomes, cost, and quality of life with the addition of panniculectomy to ventral hernia repair in overweight patients