What can ecological studies tell us about death? | springermedizin.de Skip to main content
TOOLBAR 1 2 3 4
SUCHE MENÜ 1 2 3 4

Titel
What can ecological studies tell us about death?
Autor:
Yehuda Neumark 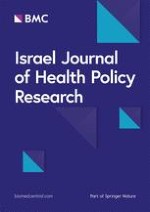 Out of hospital Cardio-pulmonary arrest - Is there a role for the primary healthcare teams?

Providers and patients face-to-face: what is the time?

On the implications of desexualizing vaccines against sexually transmitted diseases: health policy challenges in a multicultural society

Violence against physicians and nurses in a hospital: How does it happen? A mixed-methods study