Understanding the origin and shaping the current knowledge of canine atopic dermatitis (cAD) with an emphasis on its similarities and differences with its human counterpart, human atopic dermatitis (hAD), has been the purpose of this study.

Fundamental research on the ethiopathogenesis and recent specific therapeutic findings have gradually reclassified cAD from a single disease to a multifactorial syndrome.

From first being referred to as “red mange” or “canine eczema” in a dog reacting to ragweed pollen, cAD has then been considered to be the canine counterpart of hAD. Both conditions share comparable historical discoveries as well as treatment evolutions such as skin barrier defects, the use of cyclosporine, proactive topical corticosteroids, or recent use of biotherapies. More recent discoveries have however shown some fundamental differences between both conditions such as the place of flea infestation and Malassezia infections in the dog or the hygiene theory in human. As in human medicine*, cAD is also a source of conceptual and nosological remaining controversies. 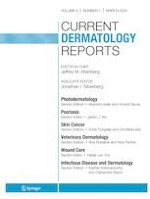 Sunscreen Safety: a Review of Recent Studies on Humans and the Environment

Photoaging: a Review of Current Literature