In 2019, the highest court in Australia is deliberating on the question of what constitutes mutilation. This paper examines the arguments in the first case prosecuted using Female Genital Mutilation law in Australia and considers how the arguments have drawn on ideas of function and desire of women’s genitals as well as of women themselves. The brief writings on this case and on FGM law in Australia are discussed, particularly the work of Kennedy, Sullivan, Seuffert and Iribanes, and Gans.

The paper finds that the ideas of genital function in the deliberations and judgments of this case rely on a problematic idea of the natural function of a woman and a presumption of the harm of female genital mutilation irrespective of alternative research, and rely on a singular document published in Australia in 1994 that did not include any engagement or opinions of people from the communities who practice circumcision or genital cutting in Australia.

The partial information relied on in Australian law about the practices of female genital cutting and the immediate presumption of harm in respect to any form of the practices means that future research and indeed legal opinion already presume that the practices are a mutilation.

Titel
What Constitutes Mutilation? A Concern With Anti-Female Genital Mutilation Laws in Australia and the Question of Natural Function
Autor:
Juliet B. Rogers 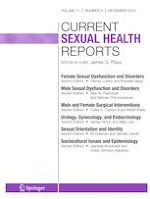 Understanding Prostate Cancer in Gay, Bisexual, and Other Men Who Have Sex with Men and Transgender Women: A Review of the Literature

Management of the Acute Phase of Peyronie’s Disease: a Contemporary Review

Surgical Techniques and Pitfalls for Excision and Grafting

Climacturia (Uroclimax) in Men After Radical Prostatectomy: A Comprehensive Review of the Current Literature and Treatment Strategies