It has been proposed that the performance of athletic tasks where normal motion is exceeded has the potential to damage the anterior cruciate ligament (ACL). Determining the expected or ‘normal’ kinematic profile of athletic tasks commonly used to assess ACL injury risk can provide an evidence base for the identification of abnormal or anomalous task performances in a laboratory setting.

An electronic database search was conducted on the SPORTDiscusTM, MEDLINE, AMED and CINAHL (January 1980–August 2013) databases using a combination of relevant keywords.

Studies identified as potentially relevant were independently examined by two reviewers for inclusion. Where consensus could not be reached, a third reviewer was consulted. Original research articles that examined three-dimensional hip and knee kinematics of female subjects during the athletic tasks of interest were included for review. Articles were excluded if subjects had a history of lower back or lower limb joint injury or isolated data from the female cohort could not be extracted.

Two reviewers independently assessed the quality of included studies. Data on subject characteristics, the athletic task performed, and kinematic data were extracted from included studies. Studies were categorised according to the athletic task being examined and each study allocated a weight within categories based on the number of subjects assessed. Extracted data were used to calculate the weighted means and standard deviations for hip and knee kinematics (initial contact and peak values). ‘Normal’ motion was classified as the weighted mean plus/minus one standard deviation.

Of 2,920 citations, a total of 159 articles were identified as potentially relevant, with 29 meeting all inclusion/exclusion criteria. Due to the limited number of studies available examining double-leg drop landings and single-leg drop vertical jumps, insufficient data was available to include these tasks in the review. Therefore, a total of 25 articles were included. From the included studies, ‘normal’ ranges were calculated for the kinematic variables of interest across the athletic tasks examined.

Joint forces and other additional elements play a role in ACL injuries, therefore, focusing solely on lower limb kinematics in classifying injury risk may not encapsulate all relevant factors. Insufficient data resulted in no normal ranges being calculated for double-leg drop land and single-leg drop vertical jump tasks. No included study examined hip internal/external rotation during single-leg drop landings, therefore ranges for this kinematic variable could not be determined. Variation in data between studies resulted in wide normal ranges being observed across certain kinematic variables.

The ranges calculated in this review provide evidence-based values that can be used to identify abnormal or anomalous athletic task performances on a multi-planar scale. This may be useful in identifying neuromuscular factors or specific muscular recruitment strategies that contribute to ACL injury risk. 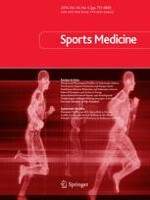 Are Post-Exercise Appetite Sensations and Energy Intake Coupled in Children and Adolescents?

Interference between Concurrent Resistance and Endurance Exercise: Molecular Bases and the Role of Individual Training Variables

Pacing and Decision Making in Sport and Exercise: The Roles of Perception and Action in the Regulation of Exercise Intensity

Erratum to: S100B as a Marker for Brain Damage and Blood–Brain Barrier Disruption Following Exercise

Weight-Making Strategies in Professional Jockeys: Implications for Physical and Mental Health and Well-Being