Reports in the literature of high recurrence rates after native tissue repair for pelvic organ prolapse led to the development of alternative techniques, such as those using synthetic mesh. Transvaginal mesh (TVM) delivery systems were implemented in search of better outcomes. Despite reported recurrence as low as 7.1 % after posterior colporrhaphy, mesh kits were developed to correct posterior compartment prolapse. There is a paucity of data to substantiate better results with TVM for rectocele repair. Three randomized controlled trials comparing native tissue repair to synthetic mesh reported posterior compartment outcomes and two of these failed to show a significant difference between groups. Complications of TVM placement are not insignificant and mesh extrusion was reported in up to 16.9 %. Based on currently available data, native tissue repairs have similar outcomes to synthetic mesh without the risks inherent in mesh use and remain the standard of care for the typical patient. 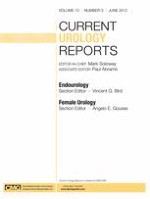