What we have gained and what have remained controversial in the field of rhizotomy for spasticity since 2007 | springermedizin.de Skip to main content
TOOLBAR 1 2 3 4
SUCHE MENÜ 1 2 3 4

Dr. Morota was born and raised in Tokyo, graduated from Shinshu University in Matsumoto, and joined the Department of Neurosurgery (under professor Ken-ichiro Sugita at the time) at Shinshu University after finishing his residency. He began his career as a pediatric neurosurgeon in 1986 after he spent a year as a clinical fellow at Kobe Children’s Hospital. He moved to New York University Medical Center in 1991. Upon his return to Japan in 1995, he studied spinal and epilepsy surgery at Aichi Medical University and National Niigata Chuo Hospital. In 2002, he was appointed Director of the Division of Neurosurgery in the newly founded National Center for Child Health and Development in Tokyo and led it to become the largest pediatric neurosurgical service in Japan. He moved to Tokyo Metropolitan Children’sMedical Center in 2014 and served as a president of the 46th annual meeting of Japanese Society of Pediatric Neurosurgery in 2018. He, then, moved to Kitasato University School of Medicine from October 2018 to establish Division of Pediatric Neurosurgery there.He is specialized in surgery of craniovertebral junction, deep- seated brain and brainstem tumors, lumbosacral congenital anomalies, neuroendoscopy, spasticity, and intraoperative neurophysiology.

Titel
What we have gained and what have remained controversial in the field of rhizotomy for spasticity since 2007
Autor:
Nobuhito Morota 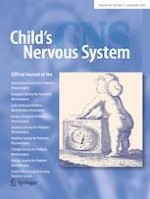 Selective dorsal rhizotomy: functional anatomy of the conus-cauda and essentials of intraoperative neurophysiology

Cerebellar tumour-like aggregate of glycosaminoglycans in a MPS IIIB patient: a case report