A non-randomized effectiveness trial was conducted in an urban secondary care public mental health service in Ireland. The effectiveness of an 8 session group cognitive behavior therapy program (gCBT-8), where the focus was on behavioral activation and cognitive restructuring, was compared with that of an enhanced 12 session group cognitive behavior therapy program (gCBT-12), which contained additional sessions on schema work, and a 12 session information and support control group program (gIS-12) in which there was no CBT skills training. One hundred and eighty-one adults with unipolar mood disorders were allocated to gCBT-8 (N = 67), gCBT-12 (N = 62), or gIS-12 (N = 52). Before and after treatment, and at 6 months follow-up participants completed the Beck Depression Inventory II (BDI-II), the Beck Anxiety Inventory, the Clinical Outcome and Routine Evaluation, the Dysfunctional Attitudes Scale, and the brief World Health Organization Quality of Life Scale. An intention-to-treat analysis of mean scores showed that the three programs had similar outcomes. There were significant improvements on all dependent variables with post-treatment gains maintained at follow-up. The three programs also led to similar remission and combined reliable improvement and remission rates on the BDI-II. It was concluded that all three programs had similar levels of effectiveness. 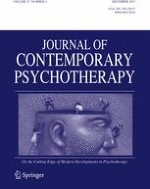 Acceptance and Commitment Therapy for Anger Dysregulation with Military Veterans: A Pilot Study

Formulation and Treatment of Chronic Suicidality in Patients with Developmental Trauma

Metacognitive Interpersonal Therapy Improves Adherence to Antiretroviral Therapies in a Man with a Severe Personality Disorder: A Case Report