Who Spends Money to Play for Free? Identifying Who Makes Micro-transactions on Social Casino Games (and Why) | springermedizin.de Skip to main content
TOOLBAR 1 2 3 4
SUCHE MENÜ 1 2 3 4 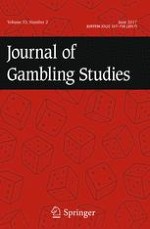 Alterations in the Emotional Regulation Process in Gambling Addiction: The Role of Anger and Alexithymia

Prevalence of Problem Gambling Among Adolescents: A Comparison Across Modes of Access, Gambling Activities, and Levels of Severity