Multiple system atrophy (MSA) is a fatal adult-onset neurodegenerative disease that is characterized by varying degrees of cerebellar dysfunction and Parkinsonism. The neuropathological hallmark of MSA is alpha-synuclein (AS)-positive glial cytoplasmic inclusions (GCIs). Although severe neuronal loss (NL) is also observed in MSA, neuronal inclusions (NIs) are rare compared to GCIs, such that the pathological mechanism of NL in MSA is unclear. GCIs and NIs are late-stage pathology features relative to AS oligomers and may not represent early pathological changes in MSA. To reveal the early pathology of MSA, it is necessary to examine the early aggregation of AS, i.e., AS oligomers. Here, we adopted a proximity ligation assay (PLA) to examine the distribution of AS oligomers in brain tissue samples from patients with MSA and other diseases. Surprisingly, MSA brains showed a widespread distribution and abundant accumulation of oligomeric AS in neurons as well as oligodendrocytes of the neocortex. In several regions, oligomeric AS signal intensity was higher in cases with MSA than in cases with Parkinson’s disease. In contrast to previous studies, AS–PLA revealed abundant AS oligomer accumulation in Purkinje cells in MSA brains, identifying oligomeric AS accumulation as a possible cause of Purkinje cell loss. This wide distribution of AS oligomers in MSA brain neurons has not been described previously and indicates a pathological mechanism of NL in MSA. 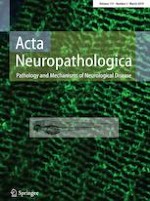