Wife beating is the most common and widespread form of intimate partner violence in Ethiopia. It results in countless severe health, socio-economic and psychological problems and has contributed to the violation of human rights including the liberty of women to enjoy conjugal life. The main purpose of this study is to assess the levels and patterns of wife beating refusal and its associated socio-cultural and demographic factors in rural and urban Ethiopia.

The 2011 Ethiopian Demographic and Health Survey (EDHS) data based on 11,097 and 5287 women in the reproductive age group (i.e. 15–49 years) living in rural and urban areas, respectively,were used in this study. Cronbach’s alpha was used to assess the internal consistency of the measure of women’s attitudes towards wife beating. The Statistical Package for Social Sciences was applied to analyze the data. A binary logistic regression model was fitted to identify variables that significantly predict respondents’ refusal of wife beating. Separate analysis by a place of residence was undertaken as attitude towards wife beating vary between rural and urban areas.

The likelihood of refusing wife beating in Ethiopia was significantly higher among urban women (54.2%) than rural women (24.5%). Although there was a significant variations in attitude towards refusing wife beating among different regions in Ethiopia, increasing educational level, high access to media, age of respondents were associated with high level of refusal of wife beating. In contrast, rural residence, being in marital union, high number of living children, being followers of some religions (Muslim followers in urban and Protestants in rural) were associated with low level of refusal of wife beating. 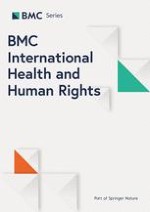 Perspectives of basic wheelchair users on improving their access to wheelchair services in Kenya and Philippines: a qualitative study

Prevalence of, and barriers to the disclosure of HIV status to infected children and adolescents in a district of Ghana

Transgender women in Malaysia, in the context of HIV and Islam: a qualitative study of stakeholders’ perceptions