Steady increased representation of women in medical schools has been reported by the American Association for Medical Colleges (AAMC), with the most notable changes occurring between 1970–71 and 1990–91 [ 1]. In those 20 years, the proportion of women graduates increased from 9% to 36%, respectively. In 2008–09, women represented 48% of accepted medical school applicants, from 44% in 1998, and 45% of the residents, from 36% in 1998. The number of women residents is progressively increasing, whereas the number of men residents has been slowly declining since 2005.
However, while the number of women residents continues to increase, there has been little change in the specialties dominated by women: Obstetrics and Gynecology (78%), Pediatric (69%), Medical Genetics (66%) and Dermatology (61%). In 2009, women represented 27% of practicing radiologists in the US. Their areas of specialization have the highest numbers in breast imaging (27%), body imaging (9%) and pediatric radiology (6%). The unequal representation of women in medical specialties is not well explained and likely multifactorial, but underscores the need for understanding of gender-related issues in specialty choice. In view of the persistent shortage of pediatric radiologists in the US, it is worthwhile to study this particular subgroup of specialists and issues uniquely related to them, as the 6% of women that are pediatric radiologists represent 38% of the pediatric radiologists in the country.
Anzeige
The data sources include the ACR’S 2003 Survey of Radiologists, the American Association of Medical Colleges (AAMC) website plus data provided by the Society for Pediatric Radiology (SPR), and other professional societies, such as Society of Chairs of Academic Radiology Departments (SCARD), Society of Chairs of Radiology at Children’s Hospitals (SCORCH) and Association of Medical School Pediatric Department Chairs (AMSPDC).

Not all pediatric radiologists are members of the SPR; however, the organization congregates the majority of those working full time in pediatric radiology, mostly in academic centers, and many of those that work on a part-time basis and on community-based institutions, as reported on surveys done in 1998, 1999, 2002 and 2009.
Among information provided by Goske et al. [ 4] on the 1999 SPR member survey, was that the average age of its female members (45 years) was lower than that of the male members (49 years). In 2001, Forman et al. [ 5] reported that the younger half of the survey respondents were women, while the older half was constituted by males. Both authors found that the representation of women in the field was increasing rather than decreasing. SPR 2009 data shows an even higher proportion of women in pediatric radiology, up to 38%. Both Table  1 and Fig.  1 depict the representation of women within the SPR, from its foundation in 1958 to 2009.
Table 1
SPR membership—increased participation of women
×

Literature on determinants of specialty choice

There is a recognized national shortage of pediatric radiologists. In the 2007–2008 update on employment market, pediatric radiology was found to be the third most difficult subspecialty in which to fill vacancies in academic centers, behind breast imaging and interventional radiology [ 6]. Reasons suggested include a financial disadvantage related to the lower practice revenues generated by pediatric radiologists, the lack of flexibility in a predominantly academic practice and the use of older imaging modalities [ 2, 6]. A motive of concern is the fact that although there is an increasing number of women attending medical schools (50%), the percentage of those choosing radiology (25%) has not significantly changed over the past several years. Arnold et al. [ 6] attempted to address the issue of factors influencing subspecialty choice among radiology residents, with particular emphasis on pediatric radiology, in a 2008 questionnaire sent to radiology trainees in the US. Analysis of the responses showed the important criteria for trainees’ decisions: area of strong personal interest, type of imaging modalities used in practice, intellectual challenge, strong personal knowledge, enjoyable rotations, marketability and job security. Another study by Robidoux et al. [ 7], measuring female medical students’ level of interest in radiology, mentioned the importance of flexible hours, intellectual challenge, patient care and mentoring.

A limitation of this review is that the most recent comprehensive ACR data is from 2003, stressing the need for more current and continuous evaluation of gender representation in radiology.
It is worthwhile to reflect on the topics raised by this review, in order to better understand gender-related issues in the choice of specialty and to work towards possible solutions to the current shortage of specialists in the field of pediatric radiology, recognizing the role played by the increasing number of women who choose it as a career. 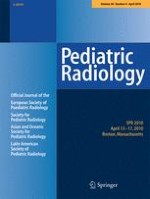 Radiologists in the workplace

Imaging of head and neck neoplasms in children

Ultrasound of the bowel in children: how we do it

MRI of the knee: key points in the pediatric population