This commentary follows a previous work on women’s life span and age at parity. It raises questions about the relationship between women’s health late in life and age of parity and aims to provide statistical evidence thereof.

This study used data at a national level to estimate a panel data for the EU countries for the period 2005–2013. The women’s health was measured by healthy life years after 65, morbidity after 65 and self-perceived health status after 65. The age of parity was captured by mean age of women at birth of first child, mean age of women at childbirth (for the first child and for any other) and percentage of adolescent mothers.

There is a positive relationship between the mean age of women at childbirth (both the first child and any other) and the good or very good self-perceived health status reported by women older than 65, while there is a negative relationship between a bad and very bad reported health status. No statistical relation was found between women age of parity and healthy life years and health morbidity for women over 65 years old.

The analysis with aggregated data showed that there is a large heterogeneity, which prevents conclusions being drawn about general trends for EU countries. The exception was for self-reported health and age of parity, for which is there was a statistical correlation across EU countries. The results reported here are expected to motivate further research on this topic in order to establish the long-term effects of each age of parity and the optimal age for first birth. 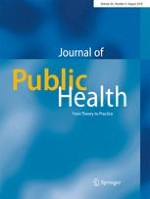