Purpose This study sought to describe Australian systems of income support for people with work disability. Specific aims were to summarise and compare the features of the income support systems, including the rehabilitation and employment services funded or provided by those systems, and factors affecting transition between systems. Further objectives were to estimate the prevalence of work disability in Australia and the national expenditure on work disability income support. Methods A mixed methods project involving collation and analysis of existing publicly available documentation and data, and interviews with 25 experts across ten major systems of income support. The prevalence of work disability and expenditure in each system, and in total, was estimated using publicly accessible data sources. System features and service models were synthesised from data sources, tabulated and compared qualitatively. Results In Australia during the 2015/2016 financial year an estimated 786,000 people with work disability received income support from a Commonwealth, state, territory or private source. An additional 6.5 million people accessed employer provided leave entitlements for short periods of work incapacity. A total of $37.2 billion Australian dollars was spent on income support for these people during the year. This support was provided through a complex array of government authorities, private sector insurers and employers. Service models vary substantially between systems, with case management the only service provided across all systems. Healthcare and return to work services were provided in some systems, although models differed markedly between systems. Income support ranged from 19 to 100% of earnings for a person earning the average weekly Australian wage pre-disability. There is a paucity of information relating to movement between systems of support, however it is likely that many thousands of people with long periods of work disability transition between systems annually. Conclusions This study demonstrates the substantial financial and human impact of work disability on Australian society. Findings indicate multiple opportunities for reducing the burden of work disability, including aligning case management and healthcare service models, and engaging employers in prevention and rehabilitation. The findings suggest a need for greater interrogation and evaluation of Australian work disability support systems. 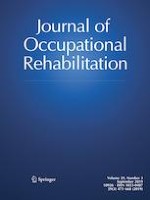 Implementation of Questionnaire-Based Risk Profiling for Clients in a Workers’ Compensation Environment: An Example in Australian Physiotherapy Practice

Development of Prediction Models for Sick Leave Due to Musculoskeletal Disorders