Worm infections continue to be among the most common diseases affecting children from low and middle income countries. Major worm infections of public health importance include Ascariasis, Trichuriasis, Hookworm, and Enterobiasis, which are transmitted through contaminated soil. In India, combined prevalence rates of worm infestation as per pooled data of 127 surveys is over 20%. Although most helminthic infections are mild and are often asymptomatic, but moderate to heavy worm infestations are generally associated with growth faltering, nutritional compromise, anemia and suboptimal academic performance among children from endemic regions. Migration of larval or adult worms also underpins pulmonary and gastrointestinal morbidity in affected children. Some of the distinctive life cycle and clinical features of various worms are discussed in the review. The gold standard diagnostic technique for evaluation of worm infestation includes stool microscopy for direct egg detection and species identification. Most of the community based surveys for detecting soil transmitted helminths (STH) use Kato-Katz technique. The drug armamentarium against worm infestation has evolved tremendously in last three to four decades with the availability of more efficacious and broad spectrum anthelminthics. The key strategies of a multi-component integrated management of worm infestation include individualized treatment, community management (mass drug administration) as well as preventive measures. Finally, barriers to diagnosis, treatment and prevention of worm infestations need to be identified and aggressively managed at individual, family and societal levels so that WHO’s 75% coverage target can be achieved to eliminate soil transmitted helminthiasis in children by 2020. 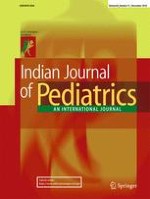 Can We Reduce the Duration of Antibiotic Therapy for Neonatal Pneumonia?

Depression Among Caregivers of Children with Cystic Fibrosis: Causes and Solutions