Strokes with onset inside the hospital account for approximately 2–17% of all acute ischemic strokes. The few existing studies addressing these in-hospital strokes lack a thorough analysis of patients who underwent endovascular mechanical thrombectomy—the state of the art therapy for acute strokes due to large vessel occlusions. The objective of the study was to evaluate the efficacy and safety of mechanical revascularization therapy in in-hospital stroke patients.

In a single-center case–control study, a propensity score-matched analysis in a 1:2 ratio with the covariates sex, age, type of occluded large vessel, i.v. thrombolysis, and National Institutes of Health Stroke Scale prior to endovascular mechanical thrombectomy was performed. All identified in-hospital stroke patients between 2010 and 2017 were matched to two consecutive out-of-hospital stroke patients. 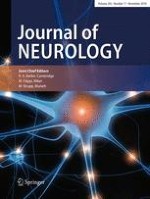 The effect of a single botulinum toxin treatment on somatosensory processing in idiopathic isolated cervical dystonia: an observational study

Effect of anti-seizure drugs on serum S100B in patients with focal seizure: a randomized controlled trial