Zinc deficiency was implicated in the etiologies of human esophageal squamous cell carcinoma (ESCC). Wild-type p53-induced gene 1 (WIG-1), a kind of zinc finger protein, was cloned from the human 3q26.3 region and encoded a putative polypeptide of 289 amino acids. Our previous studies have demonstrated that the expression of WIG-1 was downregulated in ESCC tissues. Herein, we investigated the effect of zinc on cell proliferation, apoptosis, as well as expression of WIG-1 in EC109 cells. Meanwhile, an RNAi vector of WIG-1 was transfected into EC109 cells and the effect of zinc on WIG-1 expression was investigated. We found that zinc could suppress cell proliferation and induce G0/G1 cell cycle arrest and apoptosis of EC109, and this efficacy might result from the expression altering of several apoptosis-related genes, such as Bax, p21 WAF , and cyclin D1. In particular, upregulation of WIG-1 was observed after zinc supplementation, indicating that WIG-1 might be involved in the zinc-induced cell cycle arrest and apoptosis of EC109 cells by regulating the expression of Bax, p21 WAF , and cyclin D1. 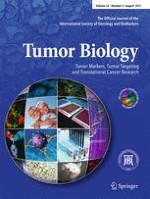 MKK4 acts as a potential tumor suppressor in ovarian cancer