The purpose of this study is to compare the postoperative corneal biomechanics and assess the influence factors after femtosecond-assisted laser in situ keratomileusis (FS-LASIK) and laser-assisted subepithelial keratomileusis (LASEK) for high myopia. In this retrospective study, patients who completed 1-year follow-up were included. The corneal biomechanical parameters, including deformation amplitude ratio 2.0 mm (DA ratio 2.0 mm), integrated inverse radius (IntInv Rad), stiffness parameter at first applanation (SP-A1), and Ambrosio relational thickness through the horizontal meridian (ARTh), were measured with Corvis STII. We also investigated the relationship between these biomechanics and preoperative or intraoperative variables. Thirty eyes had FS-LASIK and 30 eyes had LASEK. The changes in DA ratio 2.0 mm, IntInv Rad, and SP-A1 after surgery were significantly smaller in the LASEK group than in the FS-LASIK group, while the change in the ARTh was not significantly different between groups. No significant differences were detected in the mean values of postoperative DA ratio 2.0 mm, IntInv Rad, and SP-A1 between LASEK and FS-LASIK, while significant difference was detected in the mean value of postoperative ARTh. There was a significant correlation between the resident stromal bed thickness and the postoperative DA ratio 2.0 mm, IntInv Rad, or SP-A1. The postoperative ARTh has shown significant correlation with postoperative central corneal thickness and the amount of myopic correction. The effect of LASEK on corneal biomechanics was smaller than FS-LASIK when the same central corneal thickness was consumed. LASEK may be performed with a lower risk of postoperative corneal ectasia than FS-LASIK.
Anzeige 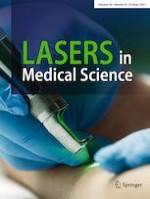 Centration of myopic refractive ablation: should we center treatment on the pupil or the visual axis?