The histamine H3 receptors are presynaptic neuroreceptors that inhibit the release of histamine and other neurotransmitters. The receptors are considered a drug target for sleep disorders and neuropsychiatric disorders with cognitive decline. We developed a novel PET ligand for the H3 receptors, [11C]TASP0410457 ([11C]TASP457), with high affinity, selectivity and favorable kinetic properties in the monkey, and evaluated its kinetics and radiation safety profile for quantifying the H3 receptors in human brain.

[11C]TASP457 PET showed high uptake (standardized uptake values in the range of about 3 – 6) in the brain and fast washout in cortical regions and slow washout in the pallidum. The two-tissue compartment model and graphical analyses estimated V T with excellent identification using 60-min scan data (about 16 mL/cm3 in the pallidum, 9 – 14 in the basal ganglia, 6 – 9 in cortical regions, and 5 in the pons), which represents the known distribution of histamine H3 receptors. For parametric imaging, MA1 is recommended because of minimal underestimation with small intersubject variability. The organs with the highest radiation doses were the pancreas, kidneys, and liver. The effective dose delivered by [11C]TASP457 was 6.9 μSv/MBq.

[11C]TASP457 is a useful novel PET ligand for the investigation of the density of histamine H3 receptors in human brain. 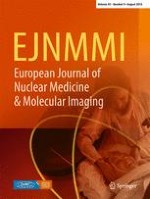 Role of 68Ga somatostatin receptor PET/CT in the detection of endogenous hyperinsulinaemic focus: an explorative study