The Rapid Response Radiotherapy Program (RRRP) is an outpatient radiotherapy clinic for palliative cancer patients where consultation, planning, and radiation treatment can take place in 1 day, allowing for rapid access to care. The objective of this study was to compare the patient population and overall survival of patients seen in the RRRP from 2014 to 2017 to that of patients seen in 1999.

Patient characteristics including sex, primary cancer site, sites of metastases, and Karnofsky Performance Status (KPS) were recorded at each clinic visit. Date of death (DOD) was retrieved from the Patient Care System (PCS) and Excelicare. To show overall survival from the first clinic visit, a Kaplan-Meier overall survival curve was generated in all patients from 2014 to 2017.

The changing patient population in the RRRP has resulted in visible changes in survival. This may reflect differences in the proportion of patients with specific primaries and sites of metastases, as well as improvements in the availability of palliative radiation over the last two decades. 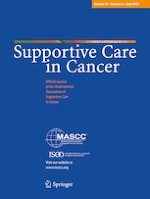 Family caregivers for adult cancer patients: knowledge and self-efficacy for pain management in a resource-limited setting