Granulocyte colony-stimulating factor (G-CSF) is commonly used in clinical practice to accelerate neutropenia recovery after chemotherapy. G-CSF is a myeloid growth factor produced by monocytes, macrophages, fibroblasts and endothelial cells. Generally, aortitis and arteritis are not a known side effect of G-CSF and is thought to be extremely rare. Here, we present a case of a 77-year-old woman who underwent adjuvant chemotherapy (combined paclitaxel and carboplatin) for ovarian cancer, and then developed acute arteritis after receiving G-CSF. She developed grade 4 neutropenia on day 7 of the third chemotherapy cycle and received six G-CSF administrations. Two days after G-CSF administration, she came down with a high-grade fever that persisted for 2 weeks. Laboratory tests revealed a white blood cell count of 8700 UI, neutrophilic sequestration of 61.5%, and C-reactive protein of 8.43 mg/dl at the highest point of her fever. Considering that we were initially treating neutropenia, we diagnosed a bacterial infection, and she was treated with a course of antibiotics. However, her blood and urinalysis cultures were negative, and antibiotics were ineffective; thus, we performed a computed tomography scan to search for the cause of her persistent fever. The computed tomography scan showed remarkable thickness of the bilateral common carotid artery and the left subclavian artery consistent with arteritis. With cessation of the antibiotics course, she was followed closely without therapy, and her condition resolved in a few days. We conclude that G-CSF induced arteritis due to our exclusion of other probable etiologies. 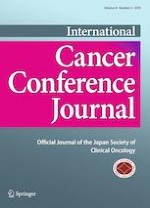 Primary retroperitoneal squamous cell carcinoma: a case report with review of the literature

Adenocarcinoma of intestinal type of the vulva