In this multicenter retrospective study, ASD patients underwent single lumbar 3CO. Since PT is proportional to pelvic incidence (PI), the low PT group (LowPT) was defined as having a baseline (BL) PT/PI <25th percentile. HRQOL and full spine x-rays were analyzed at BL and 1 year. LowPT patients were compared to those with high PT/PI (HighPT) in a matched range of T1 pelvic angle.

LowPT group had PT/PI <0.4 (n = 31). High disability was reported at baseline for both groups with significant improvement postoperatively, but without difference between groups. LowPT had significantly smaller lack lumbar lordosis but larger SVA, T1 spinopelvic inclination. Postoperatively, there were improvements in all sagittal modifiers except PT in LowPT. 33 % of LowPT had an increase in PT (>5°) postoperatively. This subset had more deformity at baseline, achieving good T1SPi postoperative correction but without achieving the SRS-Schwab target SVA at 1 year.

LowPT group had high levels of disability. After 3CO surgery, low PT patients experience only partial improvements in sagittal vertical axis (SVA) and 33 % of the group increased their PT. Further work is necessary to determine optimal realignment approaches for this unusual set of patients. It is unclear if neuromuscular pathology plays a role in the setting of high SVA without pelvic retroversion. 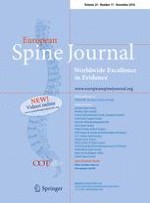 Depression is associated with increased incidence of osteoporotic thoracolumbar fracture in postmenopausal women: a prospective study

The use of a pedicle screw–cortical screw hybrid system for the surgical treatment of a patient with congenital multilevel spinal non-segmentation defect and spinal column deformity: a technical note