Many herbal medicinal products have potential hypocholesterolaemic activity and encouraging safety profiles. However, only a limited amount of clinical research exists to support their efficacy.

Aim of the work

48 rats were used throughout the experiment, which were divided into six groups, eight animals each as follows: normal control group (normal rats which fed with standard diet). After induction of hypercholesterolaemia by feeding rats with high cholesterol diet, the remaining rats were divided into five groups: group 1, hypercholesterolaemic control group (hypercholesterolaemic rats group); groups 2, 3 and 4, rats were given aqueous infusion of ginger (100, 200 and 400 mg/kg, respectively) orally; and group 5, rats were given atorvastatin (0.18 mg/kg) orally as a reference antihypercholesterolaemic drug. The blood was obtained from all groups of rats after being lightly anaesthetized with ether and the following lipid profile [serum total cholesterol (TC), HDL-cholesterol (HDL-C), LDL-C and triglyceride levels] was measured at zero time and 2 and 4 weeks after ginger and atorvastatin treatment, and the risk ratio (TC/HDL-cholesterol) was assessed.

The results revealed that the hypercholesterolaemic rats treated with aqueous ginger infusion in the three doses used after 2 and 4 weeks of treatment induce significant decrease in all lipid profile parameters which were measured and improved the risk ratio. 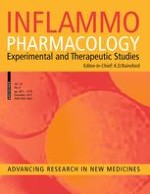 The sad plight of multiple sclerosis research (low on fact, high on fiction): critical data to support it being a neurocristopathy

Concerning: “The sad plight of multiple sclerosis research (low on fact, high on fiction): critical data to support it being a neurocristopathy” by Peter O. Behan and Abhijit Chaudhuri

Erratum to: The sad plight of multiple sclerosis research (low on fact, high on fiction): critical data to support it being a neurocristopathy