The relationship between built environments and the quality of life (QoL) of the elderly has gained great attention in recent years. However, most QoL studies have been conducted in western countries; thus, limited research was found in Asia, in which the population density, urban forms, narrow roadways, and land use patterns are more compact and highly mixed in terms of use. Therefore, the purpose of this study was an interdisciplinary analysis of two national datasets, the National Land Use Investigation and the National Health Interview Survey, to explore the relationship between built environments and the health-related quality of life of older adults in Taiwan.

Eight types of built environments at the township level were calculated, and 1222 nationally representative older adults aged 65 and older were recruited. The outcome variable was health-related QoL as measured using the EQ-5D, including utility score and the EQ-VAS. Statistical methods included descriptive analysis, bivariate analysis, and mixed-effects logistic regression analysis, which were conducted using SAS 9.4 software.

The results showed that a significant relationship exists between cultural and historical facilities and low EQ-VAS; none of the built environments were found to be related to the EQ-5D. Individual factors are the main determinants of the EQ-5D of older adults in Taiwan. Positive relationships were found if older adults were engaging in physical activities and social participation.

We suggest that building a supportive environment in which elderly people could consistently engage in physical activities and social participation is another potential approach that might contribute to active aging. 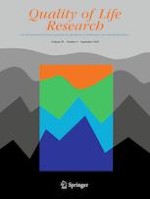 The role of family functioning and self-esteem in the quality of life of adolescents referred for psychiatric services: a 3-year follow-up

Socioeconomic inequalities in oral health-related quality of life in adolescents: a cohort study

Sports participation and health-related quality of life: a longitudinal observational study in children

Cutoff of the Zarit Burden Interview in predicting depression and anxiety