Acetabular component position alone has not been predictive of stability after total hip arthroplasty (THA). Combined anteversion of the acetabulum and femur has the potential of being more predictive of stability. Unfortunately, femoral component position is difficult to measure on plain radiographs. Computed tomography (CT) is the gold standard for measuring implant position post-operatively, but CT exposes patients to a substantial amount of radiation.

We sought to determine whether biplanar low-dose radiography can be used to accurately measure both acetabular and femoral implant position after THA.

Biplanar radiography is a reliable low-radiation alternative for measuring acetabular inclination, acetabular anteversion, femoral version, and thus combined anteversion compared to CT. Femoral anteversion had the most variability but is still clinically relevant. 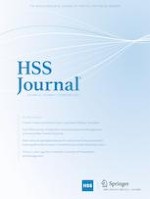 Correction to: the Scientific Basis for Modern Physical Therapy