To compare a local cohort of 2488 men occupationally exposed to asbestos and enrolled in a public health surveillance program with the 1995–2009 cancer incidence of the general population of Friuli Venezia Giulia (FVG) region, Northeast Italy, we conducted a historical cohort study.

Standardized incidence ratios (SIRs), with 95% confidence interval (95% CI), for specific cancer sites were estimated in the cohort and in subgroups of workers employed in shipbuilding between 1974 and 1994. For internal comparisons, we calculated incidence rate ratios (IRRs) for all cancers, lung cancer and mesothelioma, by level of exposure to asbestos and sector of employment adjusted for smoking habits and age at start of follow-up.

This cohort experienced an excess in the incidence of both mesothelioma and lung cancer, showing increasing incidence rates at higher level of asbestos exposure. For lung cancer, the relative incidence was highest among workers hired in shipbuilding between 1974 and 1984. 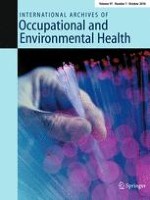