Characteristics of familial type 1 diabetes: effects of the relationship to the affected family member on phenotype and genotype at diagnosis | springermedizin.de Skip to main content
TOOLBAR 1 2 3 4
SUCHE MENÜ 1 2 3 4

The online version of this article (https://​doi.​org/​10.​1007/​s00125-019-4952-8) contains peer-reviewed but unedited supplementary material, which is available to authorised users.
A complete list of investigators for the Finnish Pediatric Diabetes Register can be found in the electronic supplementary material (ESM).

In previous studies, the risk of developing familial type 1 diabetes has been reported to be more than two times higher in the offspring of affected fathers than in those of affected mothers. We tested the hypothesis that index children with an affected father may have a more aggressive disease process at diagnosis than those with other affected first-degree relatives.

A cross-sectional, observational study was performed using the Finnish Pediatric Diabetes Register. Clinical and metabolic characteristics, beta cell autoantibodies and HLA class II genetics were analysed from index children in Finland diagnosed before the age of 15 years between January 2003 and December 2016. Information on the presence of type 1 diabetes in first-degree relatives was collected at diagnosis using a structured questionnaire.

The more severe metabolic derangement at diagnosis in children with sporadic type 1 diabetes compared with those with familial type 1 diabetes was confirmed. The higher frequency of diabetic ketoacidosis and increased weight loss at diagnosis in index children with an affected father compared with an affected mother support the hypothesis that paternal type 1 diabetes is associated with more severe disease in the offspring than maternal diabetes. The sex difference seen between affected parents diagnosed before and after the birth of the index child supports the hypothesis that maternal insulin treatment protects against type 1 diabetes. 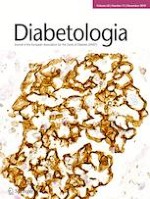 The relationship between eGFR slope and subsequent risk of vascular outcomes and all-cause mortality in type 2 diabetes: the ADVANCE-ON study