Ten instruments from each group were selected and allowed to rotate using a low-torque motor in a stainless steel block with 1.5 mm diameter, 3 mm radius of 60° angle of curvature at the manufacturer’s recommended speed, and the number of cycles (NCF) from the beginning to the fracture was recorded. The data were analyzed using one-way ANOVA followed by post-hoc Tukey’s test (P = 0.05).

In endodontic practice, preferring the instruments with higher cyclic fatigue resistance would help to minimize the risk of instrument fractures; therefore especially during the preparation of curved canals, instruments with smaller core area and less cross-sectional metal mass, which could lead higher flexibility, can be proposed. 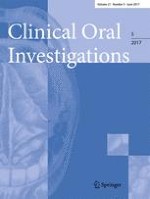 Effect of antiresorptive drugs in the alveolar bone healing. A histometric and immunohistochemical study in ovariectomized rats