Crossover stenting of femoral bifurcation raises the concern of jeopardizing the deep femoral artery (DFA) entry, thereby increasing future risk of limb-threatening ischemia and amputation. This retrospective multicenter study compared clinical outcomes of crossover stenting and non-crossover stenting for ostial superficial femoral artery (SFA) lesions. We reviewed 125 limbs in 103 patients with successful stent implantation for ostial SFA lesions and allocated them to two groups, based on whether the stent crossed over the DFA orifice (CO, n = 54) or not (NC, n = 71). The decision of applying whether CO or NC was at the operators’ discretion. Primary endpoints were incidences of major amputation and acute limb ischemia (ALI) at 24 months, and secondary endpoints were incidences of death, target lesion revascularization (TLR), composite of amputation or death, and major adverse limb events which was a composite of major amputation, ALI, TLR, or death at 24 months. Baseline characteristics were similar between the groups. Major amputation occurred only in the NC group, while ALI occurred only in the CO group. Kaplan–Meier estimation showed no significant differences in incidences of major amputation (NC: 3.0% vs. CO: 0.0%, p = 0.21), ALI, or any of the secondary endpoints. However, there was a trend towards higher incidence of ALI in the CO group (NC 0.0% vs. CO 3.9%, p = 0.11). Crossover stenting did not result in a significant difference in major amputation compared to non-crossover stenting within 24 months. However, it showed a trend towards higher incidence of ALI. 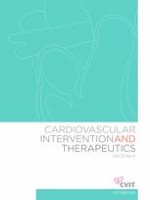