Epilepsy is a heterogeneous disease with a broad phenotypic spectrum and diverse genotypes. A significant proportion of epilepsies has a genetic aetiology.
In our study, a custom designed gene panel with 112 genes known to be associated with epilepsies was used. In total, one hundred and fifty-one patients were tested (86 males / 65 females).

In our cohort, the highest probability for the identification of the cause of the disease was for patients with a seizure onset within the first four weeks of life (61.9% clarification rate) – about two times more than other groups. The level of statistical significance was determined using a chi-square analysis.
From 112 genes included in the panel, suspicious and rare variants were found in 53 genes (47.3%).
Among the 151 probands included in the study we identified pathogenic variants in 39 patients (25.8%), likely pathogenic variants in three patients (2%), variants of uncertain significance in 40 patients (26.5%) and likely benign variants in 69 patients (45.7%). 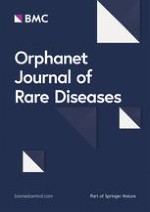 Pulmonary hemosiderosis in children with Down syndrome: a national experience

Functional improvements in patients with lymphangioleiomyomatosis after sirolimus: an observational study