The efficacy and safety of mycophenolate mofetil (MMF) has been studied in patients with systemic sclerosis (SSc)-related interstitial lung disease (ILD) with moderate–severe impairment. There is no study on its use in patients with mildly impaired lung function. The objective of this study is to determine the efficacy and safety of MMF for treating mild SSc-ILD (forced vital capacity (FVC) ≥ 70% predicted). This was a double-blind, randomized, placebo-controlled pilot trial. The subjects with SSc-ILD with FVC ≥ 70% were randomized to receive either MMF (2 g/day) or placebo for 6 months. FVC, diffusing capacity of lungs for carbon monoxide (DLCO), modified Rodnan skin score (mRSS), Short Form-36 (SF36v2), Mahler’s Dyspnoea Index (MDI), and 6-min walk distance (6MWD) were recorded at baseline and at 6 months. Forty-one subjects were included in the study (MMF: 20, placebo: 21). FVC decreased by a median of 2.7% (range − 21 to 9) in MMF arm and increased by 1% (range − 6 to 10) in placebo arm (p = 0.131). SF36v2 scores improved in both the groups. Median change in MDI (3 vs 3), DLCO (1% vs 1.5%), and 6MWD (0 m vs 0 m) was similar between the study groups. MMF was effective in improving mRSS (− 5 vs − 1, p = 0.045) compared to placebo. Adverse events occurred with similar frequency in both the study groups. In this pilot study, MMF did not result in significant improvement in lung function in SSc-ILD with minimally impaired lung function, but was effective in reducing the skin tightness. Larger studies are needed to confirm these findings. This study was registered at ClinicalTrials.gov (NCT02896205). 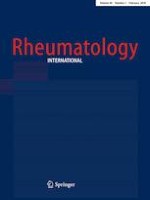 Enthesitis and its relationship with disease activity, functional status, and quality of life in psoriatic arthritis: a multi-center study