Orthodontic treatment has important correlations with periodontal changes. Various mechanical and biological factors are involved in determining such changes, but anatomical and morphological variables, generally addressed as periodontal biotype, play a key role. In measurement of such modifications, digital and non-contact reverse engineering technologies may be of tremendous advantage. The aim of this study is to retrospectively evaluate, in a series of digitized dental casts, some of the parameters addressing periodontal biotype and correlate them to extent and direction of tooth movement. Pre- (T0) and post-treatment (T1) dental casts of 22 patients were scanned by 3Shape TRIOS 3® scanner. A number of variables (crown ratio, gingival margin position, gingival contour, papillae position, gingival scallop) were investigated and their variations calculated after digital measurements on single casts at T0 and T1, or after direct measurement (T1 vs T0) on the superimposition and alignment of digital models. Univariate and multivariate statistics were then performed. No significant correlation was detected between the sagittal or vertical movement of dental crown and displacement of the gingival margin. On the other hand, vestibular gingival contour resulted significantly altered by vestibular and extrusion movements. Further studies are needed to ascertain the differential effect of bone and soft tissue on such modifications. The relationship between orthodontic treatment and the periodontium overcomes the consideration of gingival recession and includes all the concepts of periodontal biotype with its characteristics. Digital technologies and non-contact reverse engineering techniques now available have the potential to allow a more precise definition of such a relationship. 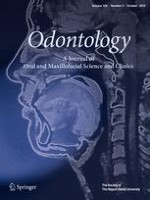