Evaluation of the effect of methamphetamine on traumatic injury complications and outcomes | springermedizin.de Skip to main content
TOOLBAR 1 2 3 4
SUCHE MENÜ 1 2 3 4

This retrospective chart review was undertaken at Arrowhead Regional Medical Center (ARMC). ARMC is a 456-bed acute care teaching facility and the only American College of Surgeons certified level II trauma center located in San Bernardino County, CA with over 92,000 visits annually. San Bernardino County is the largest county by area in the contiguous United States with a population of over two million.
Data were gathered from the trauma registry at ARMC. Trauma patients between 18 and 55 years old who were admitted between January 1st, 2005 and December 31st, 2015 were assessed for inclusion. During the study period, all trauma patients seen at our center underwent routine urine drug screening (UDS) and measurement of a serum ethanol level in the ED prior to admission. Exclusion criteria included patients with an elevated serum ethanol level (greater than  0 mg/dL) and UDS positive for any drug other than methamphetamine (including cocaine and cannabis). For trauma patients presenting to the trauma center with multiple visits, only the most recent visit was included in the analysis.
Patients were divided into two groups based on the presence of methamphetamine on urine drug screen (MA(+) vs. MA(−)). The MA(+) group included patients with a positive UDS for methamphetamine, negative UDS for cocaine and cannabis, and serum ethanol level less than 0 mg/dL. The MA(−) group was defined as patients with a triple negative UDS for methamphetamine, cocaine, and cannabis, and serum ethanol level less than 0 mg/dL. Routine UDS and serum ethanol level were performed using the Cobas 6000 analyzer series (Roche Diagnostics USA, Indianapolis, Indiana, USA). Though urine opiate levels were included in the UDS at our center, this data was not included in the study. The threshold to detect urine amphetamine concentrations was set at greater than 1000 ng/ml. Additional patient data collected included age, gender, injury severity score (ISS), mechanism of injury (blunt vs. penetrating), transfusion need during hospital stay, LOS, hospital mortality, and heart rate (normal adult resting heart rate is 60–100) and blood pressure (normal adult resting diastolic blood pressure [DBP] is less than 80 mmhg and systolic blood pressure [SBP] less than 120 mmhg) taken by first responders after arrival at the scene and by ED staff upon arrival to the trauma center. The ISS is derived from a validated scoring system used to describe overall injury severity based on the anatomic regions involved [ 20]. Major trauma (polytrauma) has been defined as ISS  greater than 15 and a higher ISS has been correlated with an increase in morbidity and mortality [ 21].
Anzeige
The primary outcome was mortality during hospital stay. Other outcomes included hospital LOS, total amount of blood products utilized during the hospital stay, heart rate taken at the scene and upon arrival to the trauma center, and SBP and DBP at the scene and upon arrival to the trauma center.
All statistical analyses were conducted using the SAS software for Windows version 9.3 (SAS Institute, Cary, North Carolina, USA). Descriptive statistics were presented as means and standard deviations for continuous variables, and frequencies and proportions for categorical variables. Chi square crosstab analysis was conducted to identify whether the proportion of penetrating trauma was comparable between the MA(+) and MA(−). If the proportions of penetrating trauma were statistically different between the MA(+) and MA(−) group, a propensity score 1–1 matching was conducted to select the same number of participants from the MA(−) to match the participants from the MA(+) group based on age, gender, ISS, and mechanism of injury (blunt vs. penetrating) using the package “MatchIt” in R. The choice of these four matching variables for the matching process was to eliminate the confounding effect on primary and secondary outcomes. After data were matched, comparison of continuous variables was conducted using the independent T test between the MA(+) and MA(−) groups. Comparison of categorical variables was conducted using the Chi square test. All statistical analyses were two-sided. p values < 0.05 were considered to be statistically significant. This study was approved by the Institutional Review Board at ARMC.

This study has several limitations. First, patients seen at our center suffering from traumatic injury during the study period underwent routine drug and alcohol screening prior to admission; however, those directly admitted or who require emergent surgery for life-threatening injuries may not have undergone drug screening. Though a small subset of patients with methamphetamine positive drugs screens may not have been included, the impact on our results was likely minimal given our matching algorthim.
Second, this study did not assess rates of ICU admission or ICU LOS. However, analysis of hospital mortality, injury severity, and transfusion need yielded no significant differences. Together, these findings suggest similar hospital courses for trauma patients with positive or negative methamphetamine screens in our study. The study also did not assess the need for surgical intervention amongst our patient sample. Combined, these two aspects significantly limit our understanding of the exact etiology leading to the observed increase in LOS.
Anzeige
Third, this study did not exclude patients with urine drug screens that were positive for opiates. Our sample included patients suffering from acute traumatic injuries, many of whom received analgesic drugs including opioid derived drugs in both the prehospital setting and upon arrival to the trauma center. Approximately 33% of patients in the MA(+) group screened positive for opiates on urine drug screen and 17% of patients in the MA(−) group screened positive for opiates. Unfortunately, we could not differentiate between opiate positive urine drugs screens that were due to analgesic cause versus illicit use. However, given the differing mechanism of action of methamphetamines and opioids, we feel that study outcomes were minimally affected.
A final limitation includes both the potential for false positive and false negative drug screens. Amphetamine and methamphetamine have been documented as the most commonly reported illicit drugs with a false-positive UDS due to their cross-reactivity with many commonly prescribed drugs like bupropion, trazodone, chlorpromazine, promethazine, ranitidine, and various antihistamines and decongestants [ 30]. Additionally, false negative results arise because toxicology screening for popular amphetamine analogues such as cathinone, a beta-ketone amphetamine moiety that has physiologic properties remarkably similar to that of methamphetamine, are underdeveloped due to the novelty of such analogues [ 31‐ 33].

No funding was received for this original research study. 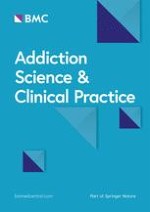 Clinician identified barriers to treatment for individuals in Appalachia with opioid use disorder following release from prison: a social ecological approach

Under one roof: identification, evaluation, and treatment of chronic hepatitis C in addiction care