Ureter peristalsis is a basic physiological function regulated by myogenic and neurogenic factors. The distribution and function of β-adrenergic receptors (β-AR) in the human ureter remain unknown. The aim of this study was to investigate the expression of β-AR subtypes in the normal and dilated human ureter.

The upper, middle, and lower segments of normal and dilated ureters were collected from patients undergoing surgery for carcinoma of the kidney and upper urinary tract and ureteral stenosis. The mucosa and muscular layers were separated. Expression of β1-AR, β2-AR, and β3-AR mRNA and protein levels were detected by real-time PCR, western blot, and immunohistochemistry.

In both mucosa and muscular layers, the mRNA and protein expressions of β1-AR, β2-AR, and β3-AR were lower in the dilated ureter compared with the normal ureter. β1-AR mRNA was significantly decreased (by 76.64%; P < 0.01) in the mucosa layer of the middle segment of the dilated ureter. β1-AR and β3-AR mRNA were significantly decreased (by 75.53 and 53.62%, respectively; P < 0.01) in the muscular layer of the lower segment of the dilated ureter. Similar findings were observed for protein expression.

The downregulation of β-ARs after ureter dilation, particularly for β1-AR and β3-AR in the muscular layer, suggests a potential compensatory mechanism involving increased contraction of the ureter to push urine through the obstruction. Thus, β-ARs may be a potential target for treatment of ureter obstruction. 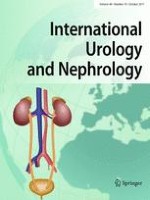 Factors affecting responsiveness to hepatitis B immunization in dialysis patients

Nephrology – Letter to the Editor