Several vectors, viral and bacterial, have been developed over the past few years for means of generating an effective antitumor immune response. We have developed and studied a “model for immunotherapy” using a viral vector disabled infectious single cycle-herpes simplex virus (DISC-HSV), which efficiently transduces various tumor cell lines and offers a useful vehicle for the further development of cell-based vaccines. The immunotherapeutic potential of DISC-HSV encoding granulocyte macrophage colony stimulating factor (GM-CSF) was demonstrated in a number of murine carcinoma models, leading to complete regression of well-established tumors in up to 70% of the mice. Moreover, the therapeutic potential of DISC-HSV-GM-CSF was significantly enhanced when used in combination therapy with either OX40L or dendritic cells (DC), even in a poorly immunogenic tumor model. The ability of this vector to accept large gene inserts, its good safety profile, its ability to undergo only a single round of infection, the inherent viral immunostimulatory properties and its ability to infect various tumor cell lines efficiently, make DISC-HSV an ideal candidate vector for immunotherapy. The DISC- CT-26 tumor model was used to investigate the mechanisms associated with immunotherapy induced tumor rejection. Although CTL induction, was positively correlated with regression, MHC class I down regulation and accumulation of immature Gr1+ myeloid cells were shown to be the main immuno-suppressor mechanisms operating against regression and associated with progressive tumor growth. The CTL response was associated with the immuno-dominant AH-1 peptide of the retroviral glycoprotein gp70. This model of immunotherapy has provided an opportunity to dissect further the immunological events associated with tumor-rejection and escape. Since other antigens may be important in initiating tumor rejection, we have investigated the expression of MTA-1, an antigen that appears to be expressed widely in human and murine tumors. The immunogenicity of MTA-1 was studied and its potential as a tumor rejection antigen is under investigation. 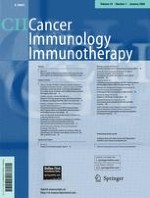 Development of a whole cell vaccine for acute myeloid leukaemia

Tripeptide tyroserleutide enhances the antitumor effects of macrophages and stimulates macrophage secretion of IL-1β, TNF-α, and NO in vitro

Characterization of glycosylation and adherent properties of melanoma cell lines