The serum glutathione S-transferase alpha (α-GST) concentration has been used as a marker of hepatic condition. After sevoflurane anaesthesia a mild impairment of hepatocellular integrity was observed. Genetic polymorphisms in CYP2E1, GSTA1 and GSTP1 genes, affecting enzymes activity, may possibly influence the hepatotoxic effect of sevoflurane. The aim of this study was to assess the influence of genetic polymorphism of CYP2E1, GSTA1 and GSTP1 genes on serum α-GST level in 86 unrelated patients representing ASA physical status I-II, undergoing laryngological surgery under general anaesthesia with sevoflurane.

The serum samples from three perioperative time points were analyzed using ELISA. Genetic variants were detected by pyrosequencing and sequencing. Finally, the statistical associations between serum α-GST concentration and analyzed alleles of CYP2E1, GSTP1 and GSTA1 genes were estimated.

The allele GSTA1*B (−567G, −69T, −52A) frequency was 0.43, whereas the alleles c.313G and c.341T of GSTP1 were identified with frequencies of 0.28 and 0.1 respectively. The -1053T allele of the CYP2E1 gene was observed with 0.01 frequency. We found serum α-GST concentrations in homozygous changes c.313A>G and c.341C>T of the GSTP1 gene significantly higher at the end of anaesthesia as compared with the levels at pre-anaesthetic and 24 h post-anaesthetic time points. Moreover, GSTA1 wild type genotype was associated with increased α-GST concentration at 24 h after the end of anaesthesia. 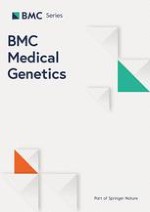 Examinations of maternal uniparental disomy and epimutations for chromosomes 6, 14, 16 and 20 in Silver-Russell syndrome-like phenotypes

Benign clear cell “sugar” tumor of the lung in a patient with Birt-Hogg-Dubé syndrome: a case report

Mutation of a common amino acid in NKX2.5 results in dilated cardiomyopathy in two large families