Opioids are commonly used for post-operative pain control. It is known that diabetic patients with ankle fractures will experience prolonged healing, higher risk of hardware failure, and an increased risk of infection. However, the opioid requirements amongst this patient cohort have not been previously evaluated. Thus, the purpose of this study is to retrospectively compare opioid utilization amongst ankle fracture patients with and without diabetes mellitus (DM).

An IRB approval was obtained for the retrospective review of patients who presented with an ankle fracture and underwent surgery between November 2013 and January 2017. A total of 180 patients (144 without DM, 36 with DM) with a mean age of 50 years (± 18 years) were included. Opioid consumption was quantified utilizing a morphine-milliequivalent conversion algorithm. A repeated measures ANOVA was conducted to compare opioid consumption. A two-tailed p value of 0.05 was set as the threshold for statistical significance. 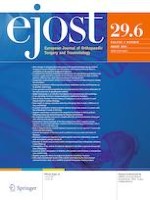 Epidermal inclusion cyst of the knee

Do component position and muscle strength affect the cup-head translation during gait after total hip arthroplasty?