We observed incident osteoporosis in 2.2% (n = 86) of the TB patients and in 1.1% (n = 162) of the matched controls. The incidence rate of osteoporosis was 4.31 and 1.80 per 1000 person-years, which was significantly higher in TB patients (p < 0.001). In multivariate analysis, TB was an independent risk factor for osteoporosis. The other independent factors associated with osteoporosis were older age, female sex, chronic obstructive pulmonary disease, asthma, and lower income. Moreover, we demonstrated that the occurrence of osteoporotic fracture was significantly higher in TB patients.

Patients with a history of active TB have a higher incidence rate of osteoporosis and osteoporotic fracture. 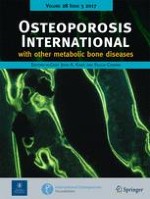 Erratum to: Use of antipsychotics increases the risk of fracture: a systematic review and meta-analysis

Mind the (treatment) gap: a global perspective on current and future strategies for prevention of fragility fractures