The aim of this study is to assess the effects of ultrasonic tip distance and orientation on the removal of a multispecies biofilm under standardized conditions in vitro.

Six-species biofilms were grown on hydroxyapatite discs for 64 h and treated with a magnetostrictive ultrasonic tip (Cavitron) placed either on contact or at 0.25- and 0.5-mm distance. The treatment was performed for 15 s with either the tip at right angle or sideways. Biofilm removal was evaluated by assessing the viable bacteria in each supernatant and compared to respective controls. In the latter, biofilms were mechanically removed and evaluated in supernatants to assess adhering and floating bacteria. Colony-forming units (CFU) were determined by cultivation on solid media. Any remaining biofilm on the treated discs was also visualized after staining with green-fluorescent SYTO® 9 stain using a confocal laser scanning microscope (CLSM). Mann–Whitney U tests and Bonferroni correction were used to analyze the results between the groups.

Overall, data indicated that bacterial detachment depended on tip orientation and distance, especially when the tip was applied sideways similar to the clinical setting.

Biofilm removal by means of ultrasonic debridement remains a crucial aspect in the treatment of periodontal disease. To ensure sufficient biofilm removal, the tip does not necessarily require contact to the surface, but an application parallel to the surface on the side is recommended. 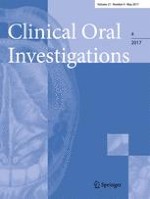 Correlation between bond strength and nanomechanical properties of adhesive interface

A comparison of lower canine retraction and loss of anchorage between conventional and self-ligating brackets: a single-center randomized split-mouth controlled trial